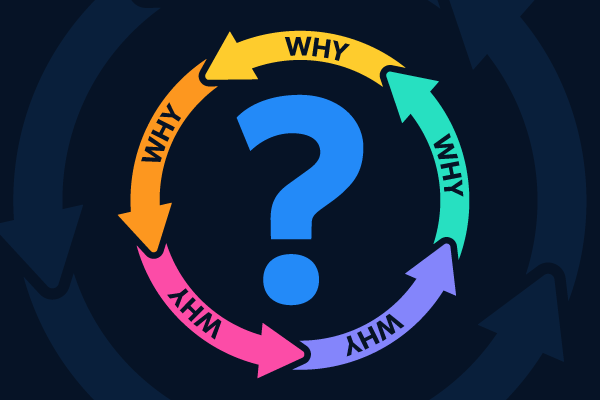 The 5 Whys Technique: How to Solve & Prevent Problems by Asking "Why?"

Wherever human error is possible, problems are inevitable.

Regardless of how well your team works together or how much success you’ve seen, something will eventually go wrong. It might be small, like a bug that can easily be fixed, or it might be bigger, like a major project for a client being delayed.

But problems, both big and small, can be solved. What’s most important is that you understand why there was a problem in the first place so you can prevent it from happening again. The 5 Whys technique is a useful tool that helps teams meet this need. Keep reading to learn more, or jump to any of the following sections:

5 Whys: What You Need to Know

What is the 5 Whys Technique?

The 5 Whys is a brainstorming technique meant to help teams identify the root cause of a problem by investigating cause-and-effect relationships. It was developed by the founder of Toyota, and it remains a key element of Toyota’s problem-solving methodology today.

The main idea behind this technique is that most problems are a symptom of a deeper issue. If that’s the case, addressing the problem itself without exploring its root cause is only a temporary fix, and the same problem could easily occur again.

If you’re thinking long-term, the most effective route is to determine why the problem occurred and implement changes to ensure it doesn’t happen again. That’s the benefit 5 Whys analysis aims to provide.

Rather than solutions, you’ll come up with “counter-measures,” or actions your team will take to prevent the problem from recurring.

And how will you get to this result? With the 5 Whys technique, you’ll do it by repeatedly asking one simple question: Why?

When to Use the 5 Whys Method

The 5 Whys is effective in its simplicity, because it doesn’t require statistical analysis or a detailed, lengthy procedure. Because of this, it can be used by a wide range of teams for a wide range of issues.

However, it does have its limitations. It’s not the best technique for evaluating a complex problem with many potential causes (not on its own, at least). It’s also less effective when you’re struggling to define a particular problem.

The 5 Whys technique is most effective in these situations:

If you’re not sure if it’s a good fit for your situation, the good news is it’s easy to give it a try. If you get started only to find that you are quickly uncovering multiple issues that require their own tracks of inquiry, you may need to shift to conduct a more detailed analysis.

In that case, you can use the 5 Whys methodology in conjunction with more detailed root cause analysis frameworks, such as a fishbone diagram, by asking the 5 Whys for each branch of the diagram.

This technique will require collaboration with people from varying teams and backgrounds, coming together to analyze the issue. That can make it difficult to gather everyone together in person for a discussion. If you can’t have a traditional face-to-face meeting, there are other options available, like online collaboration software that allows you to work on one document that can be shared as a team- and organization-wide source of truth.

To keep things virtual and accessible for everyone no matter where they’re located, you can use our online template to record and organize your thoughts as you go through the 5 whys exercise. Launch it now if you’re ready to start brainstorming, or keep reading to learn more about the process.

How to Use the 5 Whys for Root Cause Analysis

Assemble the people who will help you analyze the problem. For an exercise like this, it’s important to bring together people with different roles and perspectives to get a more holistic view of problems and solutions.

Not only should the team include a variety of perspectives, it should also be made up only of people who have firsthand experience with the process that will be examined. A crucial aspect of the 5 Whys technique is that the people answering the question “Why?” are answering based on real experiences, not theories or assumptions.

Since this technique works best with specific problems, the first thing you should do once your team is assembled is work with them to define the problem. If the problem is ongoing and you’re able to witness it in action, you should also do that for additional context.

Write the problem out as a statement to serve as the baseline of the discussion. Every other action and event you discuss during your analysis should form a chain back to that original problem.

Once your problem is agreed upon and defined, it’s time to ask why it occurred. This might be the hardest “Why” to ask, because it’s the starting point you will use to ask further questions.

Again, don’t try to make guesses if you’re not sure. Your answer should be based on what really happened.

For example, perhaps you’re analyzing a project for a client that was completed behind schedule. In that case, your answer to the first “Why” may be that certain information wasn’t communicated on time to those who needed it.

After you’ve answered the first “why,” don’t stop there! Continue asking “why” at least 4 more times, repeating the same process as the first time.

Keep in mind that five is just a number that represents the spirit of the exercise. If you’ve gotten to the fifth “why” and you still haven’t reached a logical stopping point, keep going as many times as you need. You’ll know you’ve reached a conclusion when asking “why” doesn’t yield any new or helpful information.

Note: You may find that at some point in your analysis, whether it’s the first “why” or the fourth, that there is more than one answer. In this case, you can expand your analysis to include multiple branches, and continue the 5 Whys process with each branch separately.

Just be careful! If you find yourself straying too far from the original problem, or begin uncovering many different branches of inquiry, you might want to take a step back and examine the root cause analysis differently, such as with a fishbone or Ishikawa diagram.

Step 5: Agree on a Counter-Measure

Once you are unable to ask “why” any more, the root cause of the problem should be clear. Now, you and your team must discuss and agree on the action or set of actions that will be taken to prevent the problem from recurring. Usually, this will be a change in process.

For example, if you found that there was a gap in process documentation causing the lack of communication between team members, you could agree to revise the documentation or standard operating procedure to be more clear.

This is a simple fix, but you might find that the counter-measures to address your specific problem are more complex. If so, divide responsibilities accordingly and establish a clear plan of action.

The final step is to determine if the agreed-upon counter-measures actually work in practice. Watch the process play out and see how the changes affect the outcome. If the analysis was done properly, the same problem shouldn’t happen again.

Using the 5 Whys technique and making the necessary changes puts you in a great position, because not only has the cause of the problem been discovered and dealt with, you also won’t have to use valuable time and resources to solve the same problem in the future.

The 5 Whys technique is a valuable tool that helps teams figure out why problems happen, with the goal of preventing them from happening again.

If you’re ready to take this proactive approach and dive into root cause analysis, Gliffy is the perfect tool to help you visualize your thoughts and lead an effective brainstorming session with your team.